Posted by cccleaver on April 24, 2015
Posted in: Uncategorized. Leave a comment

Kookie Richardson (left) and Jack McNutt (right) showed off the birds wing span in front of the Cleaver, Friday morning.

Jack McNutt shot his first turkey in the early morning of Friday, April 24.

McNutt was the shooter and Kookie Richardson was the caller.

The hunters got the prize in Wexford County and were all smiles about the spoils of the sunny day. 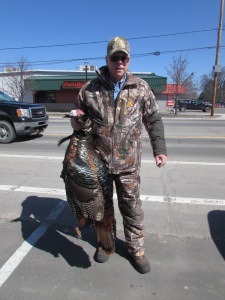 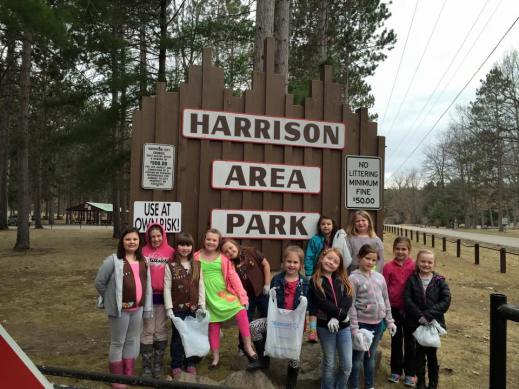 Although there wasn’t much trash over the weekend, and it was a beautiful day to play, the girls of Brownie Troop 50087 still spent time trying to clean up the park.

Harrison Daisy Troop 50846 has had a busy & interesting month of learning about Health & Safety. The Troop visited the new Harrison Health Park,

Harrison Community Fire Department, and Clare County Sheriff’s Department to learn hands‑on how these important places help to keep our community safe and healthy. Daisy Troop 50846 would like to give special Thanks to Harrison Fire Chief Pat Agin, Clare County Undersheriff Dwayne Miedzianowski and Patricia Reilly & Medical Staff for Welcoming our Troop to visit and learn with Them. 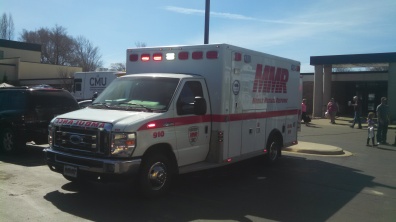 The 2015 Paula Pirnstill Memorial Health and Safety Fair was well attended this past Saturday.

Families from all over the county came out to learn about health and safety practices, check out the safety vehicles, get free hearing tests, eat some healthy food, to check out the County’s homeless pets and much more!

The weather even permitted the medical helicopter to land, which went over well for all the children waiting and watching outside.

There was a rollover and smoke‑filled house simulator and the kids got to see the inside of an ambulance along with an up close look at some of the Sheriff’s Department’s vehicles.

“The Mission of the Paula Pirnstill Memorial Health and Safety Fair is to provide a free resource, for all attendees, to become better acquainted with their own health issues and how to effectively deal with them through free medical screenings, free publications and directly talking with health professionals.” 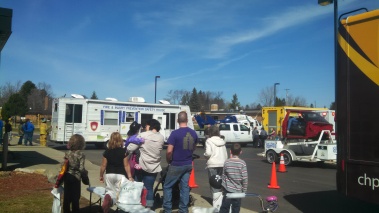 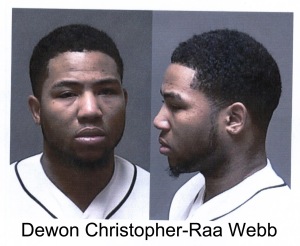 On 4/5/15, the Michigan State Police began an investigation into a series of armed robberies that had occurred in at least two apartment complexes in Union Township of Isabella County.

Through the investigation, investigators were able to determine at least three separate armed robberies occurred between February and April of 2015. The victims were all students of Central Michigan University. It was also determined each of the robberies occurred during illegal drug transactions within the apartments.

Investigators were able to identify William Jones, 19 years of age, from Detroit as one of the individuals involved with the robberies. Jones was arrested on April 9, 2015 at his dorm at Central Michigan University.

Jones cooperated with investigators and identified Dewon Webb, 23 years of age, from Detroit as one of his co‑conspirators. Jones also identified a third person. This person’s name is being withheld pending the issuance of arrest warrants.

Simultaneous search warrants were executed on 4/17/15 on two separate apartments within Union Township by the Michigan State police Emergency Support Team. Dewon Webb was arrested at that time.

Dewon Webb is also cooperating with investigators. He also identified a fourth person whose name is being withheld pending the issuance of arrest warrants.

Some of the items recovered during the search warrant were items stolen during the armed robberies.

Careless Discharge Of A Firearm/OWI

On 04‑10‑15 at 1230 am Troopers from the Mt. Pleasant Post were dispatched to a report of shots fired and an individual stealing a street sign in the area of Whiteville and Blanchard roads in Lincoln Township. Troopers located a vehicle matching the description of the suspect vehicle in Union Township and conducted a traffic stop for multiple moving violations. There were three occupants in the vehicle. Located in the vehicle were a stolen and shot street sign, a loaded handgun, and three long guns. The driver, 24 year old Dylan Kaleyta of Carson City was arrested and lodged at the Isabella County Jail. On 04‑10‑15, Kaleyta was arraigned in the 76th district court on charges of  OWI, careless discharge of a firearm, malicious destruction of property, and carrying a concealed weapon under the influence.

“I should have come down (here) initially,” were Judge Joshua Farrell’s opening remarks when appearing in front of the Clare County Board of Commissioners on Wednesday, April 15, about the raise of his Magistrate and District Court Administrator, which is a discussion that has been going on since March.

The discussion of Karen Willing receiving an 11.63 percent raise, bumping her current pay of $58,000 per year to approximately $63,500, was finally put to a yes, no vote. The decisions was split four to three, with the motion to allow Willing to receive the 11.63 percent raise, consistent with the other court administrators raise, with funds to come from the current District Court budget for the remainder of this budget year, was approved.

Before the vote, there was much discussion over the state of the county’s revenue and expenditures.

Chairman Jack Kleinhardt said that he had nothing against Willing and he agreed that she is probably underpaid for the amount of works she does, but after receiving bad news from Equalization earlier in the meeting about an estimated loss of $30,000 in property tax, he has to take a much harder look at the county’s spending.

“I’m going to be watching finances a lot closer than I have been,” Kleinhardt said.

Kleinhardt hopes that his views of the future of the county’s financial affairs is going to get better, he voted against County Administrator, Tracy Byard, purchasing a new I.D. badge system, because he believed it to be an unnecessary cost, or a purchase that could wait. The purchase of the $2,475 system was approved with opposition only from Vice Chairman Dale Majewski and Chairman Kleinhardt.

When Kleinhardt brought up the issue of spending as a reason for voting against Willing’s raise, Willing asked to speak.

Willing had sat in on most of the early morning meeting and had witnessed the Comissioners voting to allow the Prosecutor to hire a replacement for her Legal Secretary, Valerie McClellan, early so that McClellan could train the new hire. This decision was approved with no opposition and Willing argued that it was unfair of them to have little discussion on that issue, which would cost more to hire early, but that when it came to her situation, it was all about saving money.

Byard replied that the position at the Prosecutors office would be hiring with a lower salary, so it wouldn’t be costing them more in the long run.

After the split vote and approval of Willing’s raise, Byard warned the Commissioners that they opened the flood gates and that they had denied other department heads raises and that they, and union workers who don’t pay for insurance would be coming out of the wood works. County Clerk, Pam Mayfield agreed with Byard.

“There’s going to be a lot of questions,” Mayfield said, “Tracy’s right.”

After a break, Byard came back and said that it had already begun and that a Friend of the Court employee would be attending the next meeting.

The discussion of spending and the issue of what is to come with the other department heads continued into the Commissioner Reports.

Commissioner Donald David said that he voted yes to allowing Willing her raise is because he believes that the County needs to start giving increases to department heads who are underpaid. He gave the example of Kim Halis in Equalization.

“We don’t want to loose her,” David said. If she were to quit, the state would come in and take over. If that happens, David said, “we’ll be paying them a lot more just to get them in the door.”

Commissioner Karen Lipovsky said that she realizes that this decision will bring in the department heads, but as the Board, “We’ll just have to deal with it as it comes.”

Chairman Kleinhard wrapped up the discussion saying that being a good business person/leader he realizes that it’s better not to spend more than the county brings in.

“We will have to raise some and lower others,” Kleinhardt said. “We’re going to have to make some tough decisions.”

Vehicle Fire On Stockwell Under Control In Under Half Hour

Posted by cccleaver on April 16, 2015
Posted in: Uncategorized. Leave a comment

Harrison Community Fire Department was enroute at 4:35 pm and cleared scene at 5:00 pm

Clare County Sheriff Department was the only other on scene to assist with traffic control.

Daughters Of The American Revolution, Michimilimacinac Chapter Of Clare

Posted by cccleaver on April 8, 2015
Posted in: Uncategorized. Leave a comment 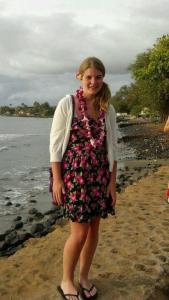 The Michimilimacinac Chapter was pleased to honor three students at their Daughters of the American Revolution Good Citizens Tea, March 22, 2015.

We had a tie in our Chapter winners: Julia David of Clare and Wyatt Duggan of Harrison. Kathrine Saupe of Farwell was just 1 point from it being a 3 way tie.

These students deserve so much credit for all they are doing and have done, not only in their school, but also in their homes, communities and churches. This distinct honor adds to their college resume and helps with college admission and job interviews. The chapter gives the students and school publicity. The school gains prestige and the community learns that there are exceptional young people in Michigan, and right in their own community. This is truly special because the school teachers and classmates chooses one of their best and gives the DAR the privilege of honoring them.

All are presented with certificates & a gift of money.

Posted by cccleaver on April 6, 2015
Posted in: Uncategorized. Leave a comment 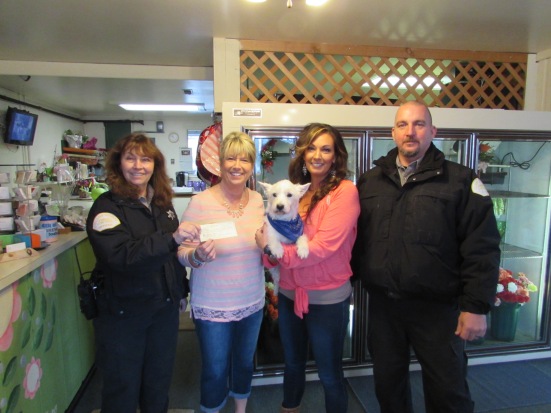 The ladies of Country Flowers raised funds for the Clare County Animal Shelter by selling “Blue’s Special Bouquets” through the month of March.

Wilson said that they sold a total of 46 bouquets, which contributed $5 from each bouquet, raising $230. The rest of the $433 was raised by additional monetary donations from the community and Country Flower’s customers. The ladies also had a few bags of dog and cat food that had been donated for the shelter pets.

Along with the bouquets the ladies also sold delicious candies made by Sweets & Treats to help raise a few more dollars for the shelter pets. Chocolate covered Oreos and white chocolate discs with Blue’s likeness on them for sale to help out Blue’s pals at the shelter.

Wilson and Giusso are planning on bringing back the Blue’s Special fundraiser for the shelter next March.